skip to main | skip to sidebar

In my A Level art class, there was this awesome girl, who had henna'd, dreaded hair and did wonderful things with a sewing machine.
She based the WHOLE of her self-directed project around this film, The Science of Sleep.
It was on sale for £3 at HMV so i got it, and watched it last night with my boyf and his sister.

It's a WEIRD film. I need to watch it again, because i didn't quite get all of it, but it's really bizzare, but dreamy and soft and...i thought it was really beautiful.

The female protagonist is played by Charlotte Gainsbourg, who is my new heroine.
I think she's beautiful, but in a tired way. Like...she looks worn down, but her long limbs and swinging hair and graceful hands just work. 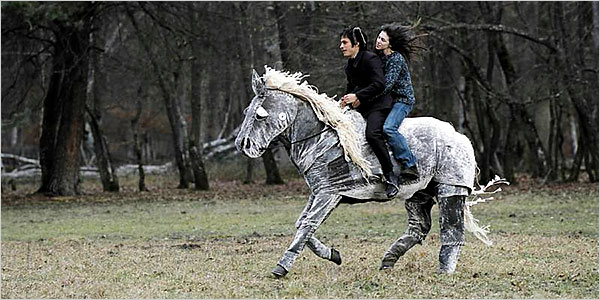 I've just found out the film was filmed in 2006- a big suprise, as there's none of the high-tech special effects that there was huge scope for (although if there had been, it would have ruined the softness).
It's a french film, and about half of it is spoken in french (subtitled) with a tiny bit of spanish, and the rest is english.

Anyway. some pretty pictures of Charlotte. she also has a beautiful voice.

I adore Charlotte Gainsbourg, though I didn't quite "get" The Science of Sleep either (though I did like Cat Band scene, haha) Need to watch this again too.

how about Gael Garcia the most handsome mexican I have ever seen? hes just lovely, dont you think?

I always love the interesting students in art classes--they are usually such true originals. There was one boy in highschool who only came to art school and usually came in high, but produced wonderful art and was such a sweet heart!
I will be living in a single dorm room (with the size and appeal of a coffin), I might be sharing it for two weeks with a friend, but the rest of the summer it will be mine alone.

This is my absolute FAVOURITE Michel Gondry movie ever....

I absolutely adore The science of sleep. It`s great! Gael Garcia and Charlotte are just..too lovely together ;)
sweet.

The first time I saw her was in Jane Eyre, which some say was not her best performance but I love that story so much it would take a lot for anyone to mess it up for me.

Gael is flat out gorgeous.

lost in translation is hands down my all time favourite movie.period.
science of sleep is a wonderful film as well, though i wasnt too impressed with its sudden ending, still charlotte is beautiful in it!

Have you seen 'Eternal Sunshine of the Spotless Mind'? If you enjoyed 'Science of Sleep', you'll enjoy 'ESOFSPM' - same director.

'Science of Sleep' is about dream vs. reality; he lets his paranoia and insecurities get in the way instead of seeing things for what they really are.

Hello Dear,
it give me a great pleasure to write you after viewing your profile which really interest me to have communication with you, if you will have the desire with me so that we can get to know each other and see what happened in future.
i will be very happy if you can write me through my email for easiest communication,and for me to send to you my photo. my email is (mos_kpax@yahoo.com)
i will be waiting to hear from you.have a blessed day.
from mostafa
24m Iran